The celebration of Light without the crucifixion of life.

Medieval illumination in its time was a celebration of life and a celebration of Light, yet it also reflected a society that crucified life. Powerful church influences used illuminated manuscripts as a tool to control the minds of people through imagery and symbolism, designed to create fear and conformity. This process disempowered people, and the repurcussions are still felt today.  My purpose in bringing this art form into the 21st century is to bring forth the Light of celebration without the shadow. I began to write my own material for the illuminations, based on messages that I received in meditation and that was when I began to see the potential of the message combined with the Medieval art. That fusion provided an opportunity that could assist people to change their lives. Ultimately, this art form is a spiritual path – an illuminated journey if you like. It is essentially a quest for redemption. This idea of redemption has been greatly misunderstood for a long time. It has nothing to do with relying on a “saviour” to redeem your sins so that you will not be judged and punished by a vengeful God. This is the shadow of redemption. True redemption is about taking responsibility for your own spiritual journey that will lead you back to the loving and compassionate Divine Source of all life.

My illuminations are gifts of Light, and provide an opportunity for healing. For aeons of time, there has been the idea that you have to conform to one set of beliefs to enter the kingdom of God. This bigotry and judgement were­ very much part of Medieval society. My purpose is to weave together the magic and beauty of this artform with the true message of redemption, to offer an opportunity for people to be healed from this negative energy that has scarred so many of us deep inside. I offer you the Light, without the shadow. My illuminations are a fusion of classical beauty and the ideas needed to help mankind come of age spiritually.  They are a bridge linking energy from a bygone era with the vibrant and powerful energies of a new era, allowing humankind to resolve old issues and move forward into a newly emerging world of awakening consciousness.

I am a Medieval Illuminator and Heraldic artist originally from
Australia; now living and working in Finland.

My Intent as an Artist is to use Universal symbolism and Sacred words to create images that speak to people on a soul level and help them to move towards finding an inner balance.  My vision is that these images will inspire and challenge people to become more; to search their own hearts for the treasure that lies within. This treasure is simply an understanding of who you really are, beyond your current human perception. It is the joy of experiencing the connection to all beings, and the Divine Source of all Life.

Art has the power to strike deep at the soul. To stir … to move … to inspire …

As a young person, my love of books, art, medieval history, all things miniature and a deep connection to the Divine naturally led me to the exquisite manuscripts produced during the Medieval era. I was brought up in the Christian church, hearing all the Bible stories  and singing the hymns. “While researching an assignment at Art College, I stumbled across a large book on medieval illuminations. As I opened it up, the images took my breath away, and I felt a connection with the past open up for me. I borrowed the book, bought myself some calligraphy pens and gold leaf then launched into copying a manuscript from the book. This art form just flowed from me like I had been doing it all my life. It was the most natural thing in the world.”

I soon began selling work at local markets and medieval festivals, eager to share my newfound passion with the world. As time went on I was invited to exhibit my work at many venues including the State Museum and the State Library of Queensland, Australia.  I have been Artist in Residence at St John’s Cathedral in Brisbane, the Abbey Medieval Festival ( Australia's largest medieval Festival ) and St Ives Medieval Festival in Sydney, Australia. My illuminations have been sent to The Head of the Marist Brothers in Rome, and been presented to Her Majesty Queen Elizabeth II.

For several years I taught Art and History to High School students, but then left it to pursue a solo art career. During this time I taught many adult classes and courses on Medieval Illumination through the Abbey Museum of Art and Archaeology and other locations in South East Queensland. I spent eleven years doing Medieval re-enactment with various groups and found this to be a wonderfully enriching experience as I experimented with many crafts such as bone carving, working with horn and embroidery. It is clear that I have very strong connections to this time period.

In 2000 I turned my back on Christianity, realizing its limitations for me, and began exploring spirituality and esoteric wisdom.  A whole new world opened up for me! Images began pouring into my head, and I realized that my art had a higher purpose. I started producing more contemporary images that chronicled the spiritual path I now walked. Pencil sketching, then digital art were my means of expression. I joined an Order of Mystics and studied with them for seven years, then joined a Mystery School studying under the Masters, all the while gaining knowledge and wisdom through my life experiences and private research.

A fusion of medieval imagery and contemporary spiritual messages

After a break of about eight years, I came back to illumination with a new passion, and a growing understanding of the important part that it still plays in our modern world. All energy works in a spiral, and I came back full circle to this art form, with a higher level of understanding. I see it as an energetic bridge that links the past and the future. ‘Sacredness’ is something that has become rare in today’s world, and is a necessary ingredient in creating a future world where people understand the true nature of themselves. I am not speaking of religion, but the development of a relationship with self that allows you to understand that there is far more to you than you realize. I believe that this sacred art can speak to people at a soul level, and allow the Divine Light within them to make its presence felt. See
videos of
my work 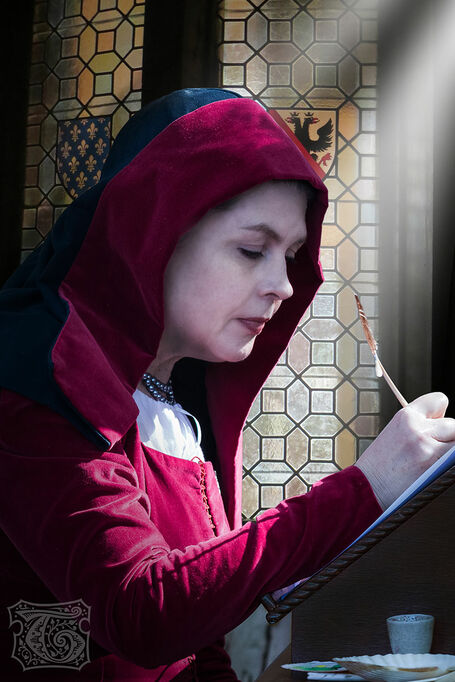 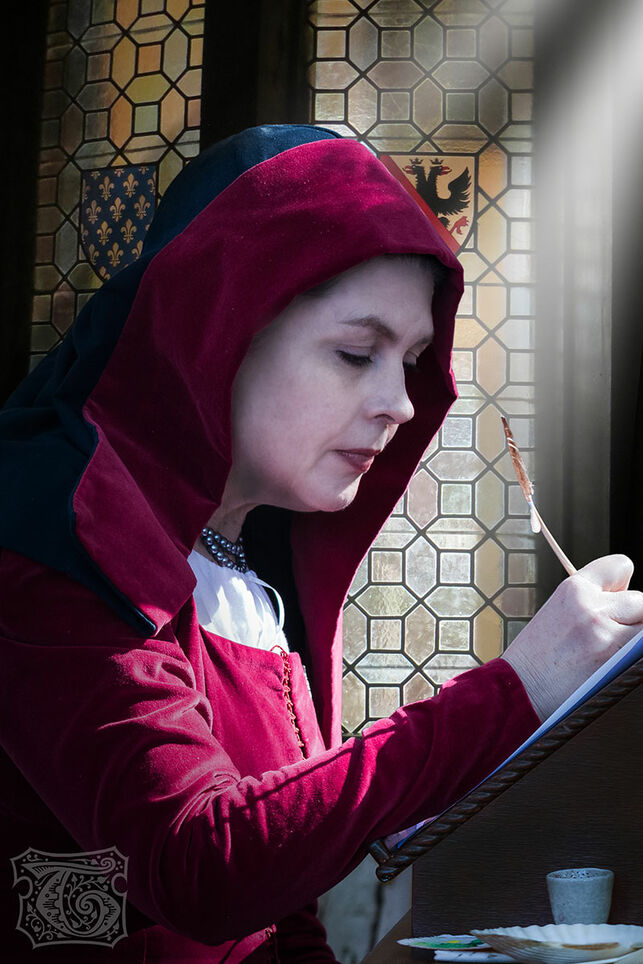 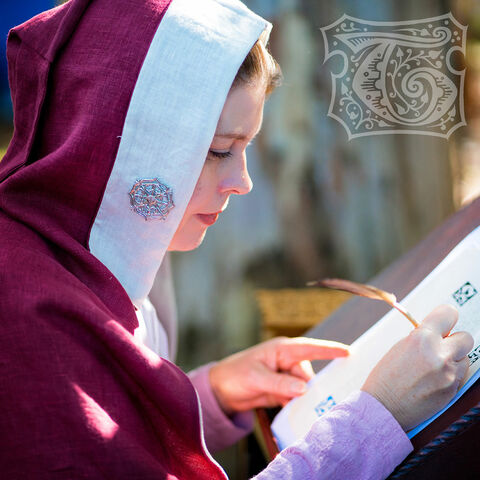 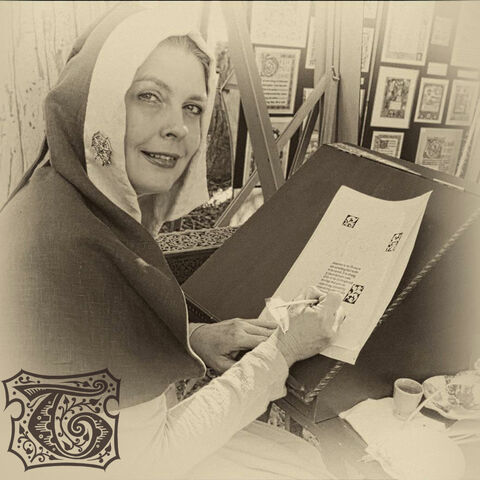 Art then for me, becomes the outer manifestation my inner journey.  I understand it to be ‘Light interpenetrating matter;’ a small part of the Divine Plan in action. I believe that art has a responsibility to encourage people to view the world and themselves in a new way.  My art is a way to share my understanding of Life with the world, and use it as a means to understand who I Am at a deeper level. It is a continual process for me then, to understand the significance of what I am producing and see how it can affect the lives of those who view and buy my art.

The Symbolism of Heraldry

In 2015 I began to explore the art of Heraldry, the sister art to Illumination. I saw that initially, heraldry was used by the noble families for the protection of sacred bloodlines; a way of securing a pure lineage that stretched far back in time to the original descendants of the great teachers of wisdom.

Heraldry today has two branches. Those who use the arms passed down to them through their families; providing them with a strong connection to their past heritage, and those people wanting to create their own heraldry. For these new armigers, assuming arms is a way of creating a combination of symbols and colours that truly represent who they are.

For many years I have enjoyed studying the power of symbols and the significance of colours. Both of these is it's own language that speaks to us at at very deep levels.

I hope you enjoy looking at my work and allow its message to touch you...